Notice: add_custom_background is deprecated since version 3.4.0! Use add_theme_support( 'custom-background', $args ) instead. in /home/sloki/user/k8088410/sites/smartbio.org/www/wp-includes/functions.php on line 3837

Notice: add_custom_image_header is deprecated since version 3.4.0! Use add_theme_support( 'custom-header', $args ) instead. in /home/sloki/user/k8088410/sites/smartbio.org/www/wp-includes/functions.php on line 3837

Notice: The called constructor method for WP_Widget in Twenty_Eleven_Ephemera_Widget is deprecated since version 4.3.0! Use instead. in /home/sloki/user/k8088410/sites/smartbio.org/www/wp-includes/functions.php on line 3900
 Genetically Modified Tobacco Virus Used to Manufacture Nanoscale Devices in Significant Advance in Biological Manufacturing | Smartbio
Smartbio is a group of people with difference academic backgrounds. Prof. Sutiman B. Sumitro is a cellular and molecular biologist, Dr. Gretha is chemical physicist, Dr. Djoko is physicist majoring in material science, Dr. Yudhi is physicist majoring on smoke characterization, Dr. Bagyo is Cardiac surgery, Dr. Sri Kumala is a food scientist (Biochemist, microbiologist). We are also supported with some other young academicians with PhD degree, mainly majoring in Molecular Biology

By Alton Parrish III on April 16, 2010 | From nanopatentsandinnovations.blogspot.com

To avoid such limitations, researchers are increasingly investigating alternative methods for the self-assembly of high surface area nanostructured materials and devices. One approach is templating materials onto biologically derived substrates. Biological templates such as nucleic acids and viruses have evolved to self-assemble into hierarchically ordered structures with high surface to volume aspects, making them ideal for the synthesis of high surface area nanomaterials.

The genetically engineered TMV virus provides for active sites to interact and adhere to a metal surface and also provide a template for deposition of conductive metal clusters.

The virus cages may be loaded with inorganic materials, including, but not limited to, metals, metal salts, metal oxides (including neat, doped and alloyed metal oxides), non-metal oxides, metal and non-metal chalcogens, sulfides, selinides, coordination compounds, organometallic species. Preferably, suitable metals include, but are not limited to, monovalent and polyvalent metals in any form depending on the end use of the nanostructure, including, but limited to aluminum, barium, cadmium, chromium, cobalt, copper, europium, gadolinium, lanthanum, magnesium, manganese, nickel, platinum, neodymium, titanium, yttrium, zirconium, terbium, lithium, zinc and iron, as well as other lanthanides. Metals that can possess magnetic properties may also be used.

FIG. 1 shows the steps for the assembly of nickel or cobalt-coated TMV1cys templates and attachment to a gold surface.  TMV was genetically engineered to express a novel coat protein cysteine residue, TMV1cys, which was then used to vertically pattern TMV particles onto gold surfaces via gold-thiol interactions. Importantly, it was found that the TMV1cys readily bound to gold surfaces and remained attached during mineralization while the unmodified wild-type virus did not (data not shown). Then an electroless deposition strategy was used to show that surface assembled TMV1cys are mineralized in a uniform manner. 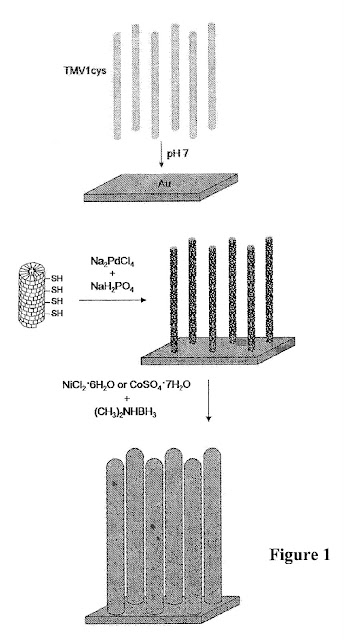 Notably, patterned TMV virion particles, with one or more added cysteine residues, function as robust templates for the reductive deposition of nickel and cobalt at room temperature via electroless deposition, producing dense carpets of oriented metal-coated viral templates. Mineralized surface assembled viruses significantly increased available surface area and enhanced electrode life and voltage output in a battery electrode system. The controlled self-assembly of these virus templates in an oriented manner combined with their enhanced functionalization to produce uniform high surface area electrodes represents a significant advance toward the manufacturing of biologically based devices. 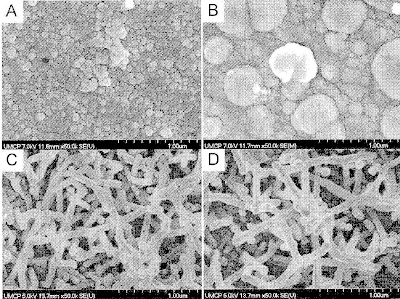 FIG. 3 shows a TEM image showing a 70 nm thick cross section of nickel-coated TMV1cys attached perpendicular to a gold-coated mica surface. Coating thicknesses of nickel encasing each particle were measured at .about.20 nm. Scale bar is equal to 300 nm. 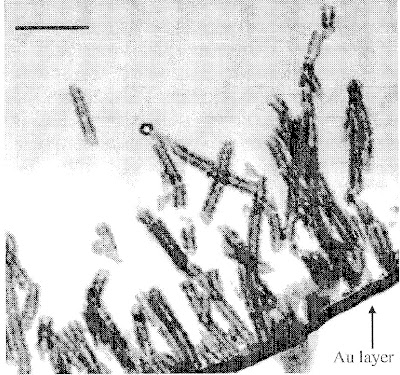 FIG. 4 shows a computer generated model diagramming the position of the 1cys mutations relative to the (a) outer rod surface and (b) the 3′ end. 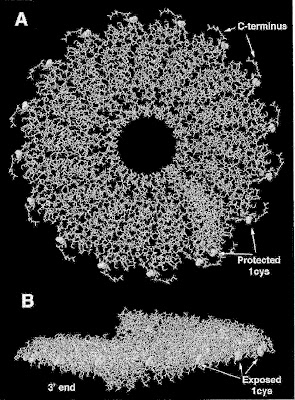 The biologically derived components are unique in that they can encode novel specificities as well as the ability to self-assemble into defined structures. Thus, they have tremendous potential for use in the development and application of a variety of nanoscale devices. One of the challenges in the use of biological components is the ability to integrate these components into devices in a functionally useful way.

The integration of TMV1cys based nanotemplates onto a solid surface was accomplished to produce functional high surface area nanomaterials. This self-assembly process works at room temperature and under mild buffer conditions and produces nanostructured materials that are uniformly oriented and coated. The density of surface assembled virus and thus available surface area are easily tuned by varying the virus concentration of the assembly reaction. A simple electroless deposition method allows the efficient and uniform metal coating of assembled virus. Once coated, surface attached viruses were highly stable under a variety of conditions including repeated washings with acetone and vacuum drying.